↓
Home→Current→Great Depression and FDR in the Hudson Valley 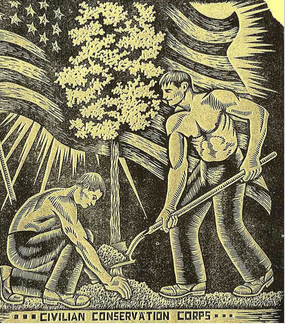 Park, New York. Years later during the Great Depression, New Deal work programs created by President Roosevelt returned to the Hudson Valley to provide jobs to tens of thousands of unemployed New Yorkers. Neil Maher’s interactive presentation traces this history – from FDR’s childhood home to the halls of Washington, D.C. and back again to the Hudson Valley — to illustrate how Roosevelt’s experiences in New York, both running his family’s estate and as Governor, greatly influenced many of his later New Deal conservation programs. Maher will focus in particular on Roosevelt’s Civilian Conservation Corps (CCC) and its impact on both the natural environment and local communities of the Hudson Valley region. This presentation, which is suited for all audiences of any size, includes a multimedia component comprised of film clips from the 1930s and PowerPoint slides, and will help participants understand that the seeds of our contemporary environmental movement were sown in Depression-era New York.